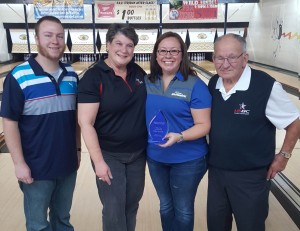 The third and final Council tournament of the season was held November 12th at Wengers Bowl. 12 ladies competed in 4 games of qualifying, followed by a cut to the top 4, and elimination bracket match play to decide a winner.  This event was held downstairs on lanes 1-8.

Sarah Pettenger qualified 3rd, and defeated Stacey Browe 254-211 in the semi-finals.  She then defeated 4th seed Carole Morgan 224-194 in the finals.  High qualifier was Michelle Kubiak