You are here: Home / News

The 56th Annual 700/800 Tournament concluded last weekend at Sparta Lanes. Lisa Doss had the high set for the event (men & women) with 1028. Winner of the Brunswick ball raffle was Jon Eickhoff.

The 53rd Annual Seniors Tournament wrapped up last weekend at Park Center.  We had an excellent turn out and some fireworks as well.  High game of the tournament was 300 by Ken Brandow.  High series for men was 759 by Clare Klamer, and for the women it was Carole Morgan with 632.  Winner of the Brunswick ball raffle was Nick Luczak.

December is quickly approaching and we have the annual Seniors Tournament as well as the 700/800 Tournament the first two weekends.

Seniors Tournament will be held at Park Center, December 1, 2, 7, and 8.  Please note that the 7th is a Friday.  Click here for entry form.

The 500/600 Tournament was held at Sparta Lanes.  Unique to this event is that it is a Bowl for the Cure fundraiser.  We had several generous donations that generated a total donation of $1,191.  Great tournament and great cause.  Round of applause and thanks to all who participated in any capacity.

Special thanks to all those who donated

The 2018 Adult/Youth Tournament was again a great success.  We had 125 entries this year.  Thank to AMF Eastbrook for hosting this years event.   Special thanks to Brunswick for donating the bowling balls; Proceeds from 50/50 and ball raffle go directly to the Grand Rapids USBC Scholarship Fund.

With the League Officers Jamboree complete, we’re looking ahead to our next events coming up in November.  The Adult/Youth Doubles will be November 3rd and 4th at Eastbrook, and the 500/600 Tournament will be November 10th and 11th at Sparta.

Fairlanes hosted 35 entries on Saturday, October 13th for the League Officers Jamboree. Andrew VanLiere rolled a 300 game and was also the winner of the Brunswick ball raffle. Ball raffle raised $166 for Grand Rapids USBC Scholarships.  Shawn Simon had the high men’s series of 769. Kay Klosowski had the high women’s series of 702.

Andrew VanLiere and Randy Rocha combined for 1486 handicap score to win the event.

Many entry blanks are already available. 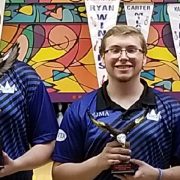 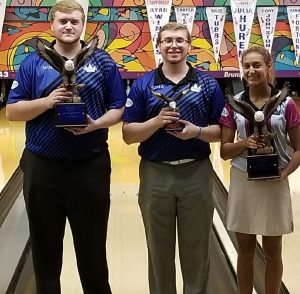 Three Greater Grand Rapids Youth Bowlers, from Spectrum Lanes-Wyoming, Stand Out in the 32nd annual Daniel C. Ottman Memorial Championships at the Monroe Sport Center- MJMA. This is a three day tournament which consisted of 18 games of qualifying, then followed by 12 games of Round Robin play and then onto step ladder finals.

Macailin Rodriguez a 2018 graduate of Caledonia High School and an upcoming Freshman Maryville University recruit averaged 192 in the 18 games of qualifying, making her the top qualifier. After the 12 games of round robin Rodriguez was number 1 seed by 172 pins actual. Rodriguez also captured the high game for the girls. The top 3 ladies advanced to the step ladder, being 1st seed Rodriguez had a bye; she then defeated Kailee Tubbs, Whitewater University, in the finals. This was Rodriguez’s first MJMA title, what a great way to end the season.

David Northouse a Davenport University bowler who just finished his freshman year, also known to his team mates as “The Finisher”, averaged 198 after 18 games of qualifying and was sitting in 4th.  After 12 games of round robin Northouse moved himself into the #2 seed. Top 5 guys advanced to the step ladder; Northouse had a bye for the first 2 rounds; then he faced his teammate Sean Taylor. Northouse defeated Taylor to move on to the finals; he then defeated Chad Stephens, LTU bowler, to claim the title.  Northouse had 2 outstanding games in the step ladder; a 278 and a 279. This is Northouse’s first MJMA title and was his last event with MJMA; Making his title even more remarkable.

Sean Taylor, Davenport University bowler who just finished his Junior year averaged 190 after 18 games of qualifying and was sitting in 7th.  After 12 games of round robin Taylor moved himself into the #5 seed, just making step ladder. Sean defeated Antar Howard, Madonna University, in the first step; Taylor then went on to defeat Ryan Winters, Whitewater University.  Taylor then faced his teammate Northouse.  Taylor had a great game but a 7-10 split did not help and also Northouse had the front 9; Taylor was defeated by Northouse, giving him a 3rd place finish overall.

Prize lists for the Open and Women’s City Tournaments are now available.